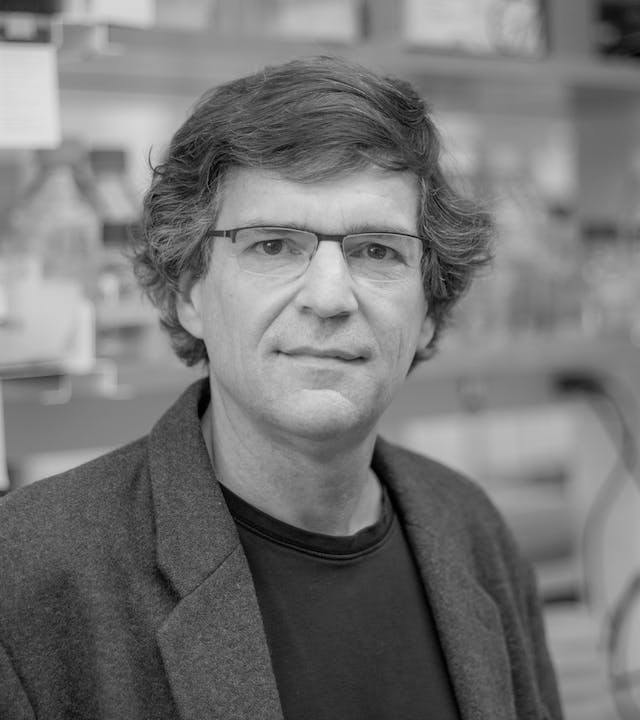 Erik J. Sontheimer, PhD, is the Pillar Chair in Biomedical Research and Professor and Vice Chair in the RNA Therapeutics Institute at the University of Massachusetts Chan Medical School in Worcester, Massachusetts.

He conducted his graduate research in the laboratory of Joan Steitz at Yale University, where he uncovered key mechanistic features of pre-mRNA splicing. He was a postdoctoral fellow at the University of Chicago in the laboratory of Dr. Joseph Piccirilli. Before moving to the RNA Therapeutics Institute in 2014, he was a Professor at Northwestern University in Evanston, Illinois. Dr. Sontheimer’s laboratory has made fundamental contributions to the fields of RNA interference, CRISPR biology, and genome editing. Among many key discoveries, his group provided the first demonstration that small RNAs known as CRISPR RNAs can target DNA molecules and was one of the first to recognize and describe the transformative potential of CRISPR for biotechnology and human therapeutics. Additional contributions include the co-discovery of naturally occurring off-switches for CRISPR-Cas9, novel Cas enzymes for genome editing, and split prime editing platforms.

He is an Associate Editor of RNA and was elected to the American Academy of Microbiology in 2016. He has served on the Board of Directors of the RNA Society and as Steering Committee Co-chair for the NIH Somatic Cell Genome Editing Consortium. He currently co-chairs the Board of Scientific Counselors at the National Cancer Institute. Dr. Sontheimer has received numerous awards, including a CAREER Award from the National Science Foundation, a New Investigator Award in the Basic Pharmacological Sciences from the Burroughs Wellcome Fund, a Basil O’Conner Award from the March of Dimes, a Scholar Award from the American Cancer Society, a Distinguished Teaching Award from the Weinberg College of Arts and Sciences at Northwestern University, the 2008 Nestle Award from the American Society for Microbiology, and the 2017 Mid-Career Award from the RNA Society. He is a co-founder and Scientific Advisory Board member at Intellia Therapeutics in Cambridge, MA.